It is a common question- how do the different educational robots compare, and which educational robot should I get?  There are many out there, and it can be confusing to know which one to pick.  Sharon Marzouk has been teaching educational robotics and technology for over 8 years, has working in schools, after schools and has worked for a robotics company in Silicon Valley, Willow Garage that spun out ROS- the open source Robotics Operating System, that many of the major robots of today operate.

She has taught kids from 2-74 years, from a diverse set of backgrounds and learning styles.  And she has a clear favorite.  The Thymio robot.

She had been teaching with the LEGO Mindstorm for 3.5 years before coming across Thymio and falling in love with it’s ability to charm users into programming and learning.  She founded TechyKids with Thymio at its center, dedicating 5 years of developing content for home and classroom use.

When you purchase the Thymio robot from TechyKids, it comes with the online courseware for you to learn robotics, coding and how to create your very own original project.  Learn directly from Sharon Marzouk and earn badges along the way.  We also have packages for classrooms, complete with a teacher dashboard.

To see the differences of robots clearly, just refer to the blurbs and chart below that compares the various robots.

Thymio robot is the most versatile robot that was actually built FOR education by educators.  This robot was developed out of EPL, a well known University in Switzerland that specializes in robotics.  Many other robots are built as robotic toys and then repurposed for education.  She has seen kids as young as four-years program the robot and understand what they are doing.  She also has received testimonials from excited 99 year olds in India program Thymio.  It is a device that transcends language, gender, age and interests.  It is also extremely durable and a favorite amongst educators with the various robots.   Program Thymio with a visual language that requires no reading, and it composes real written code in real time in a real code editor.  There is a custom open source (read: free) software called Aseba that is available for various platforms.  You can also program in Scratch, Blockly, JavaScript, and in a browser with RobotMagic.  TechyKids has over 200+ original Thymio projects created by kids and an online course that kids and adults can take to learn both the Thymio Robot and robotics as a whole.

Bee-bot is a robot that targets the very young.  You press buttons to have the robot turn or go straight.  It is only programmable from the robot itself by pushing buttons.  There is no display or device compatibility.

LEGO Mindstorm is a very wonderful platform, and can do many great things.  It is very complicated for beginners and requires it to be built AND programmed before being used.  Because of this it has a high barrier for entry, and is not portable.  Many classrooms embark on the journey of putting the robot together once and then leave it in that state.  It has many parts and can be overwhelming in the classroom.

Dash Robot is very cute and has an animated personality, but this robot is a toy.  It is not a platform.  It was made for the consumer market, modeled after a Furby and other popular toys, and only has a few sensors.  Kids grow out of Dash very quickly when it becomes clear that the functionalities and learning are quite limited.  It is in many classrooms because they have spent many marketing dollars on the visibility, but it is not the optimum learning tool for the classroom.  Many educators have complained to me that they break when they fall and go out of commission.

Questions?  Email info@techykids.com and we are happy to give you an in-depth answer and how to start learning and teaching robotics right away in your home, camp, or classroom.  Or just go ahead and order one, and see for yourself! 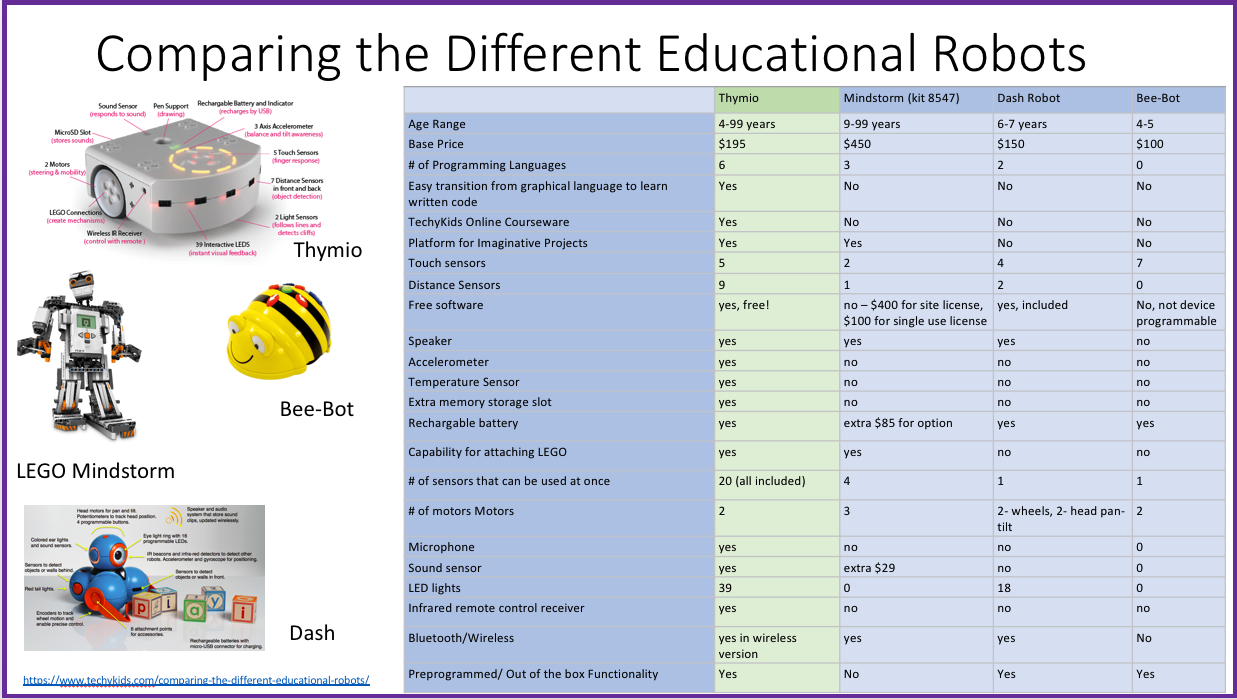