Initially, your Wireless Thymio robot is correctly configured and ready to use with the associated dongle, no need to configure anything for normal use !

For more Thymio robots and/or dongles to be in the same network, you must satisfy the following conditions:

I would like that all my robots communicate together with one single dongle.

Usage example: Synchronized actions, I am a school teacher and I stop the robots all together

Initially, your Wireless Thymio robot is correctly configured and ready to use with the associated dongle, no need to configure anything unless you have already changed the configuration.

Usage example: A student has his own Wireless Thymio and doesn’t want his instructions to interfere with other students’. 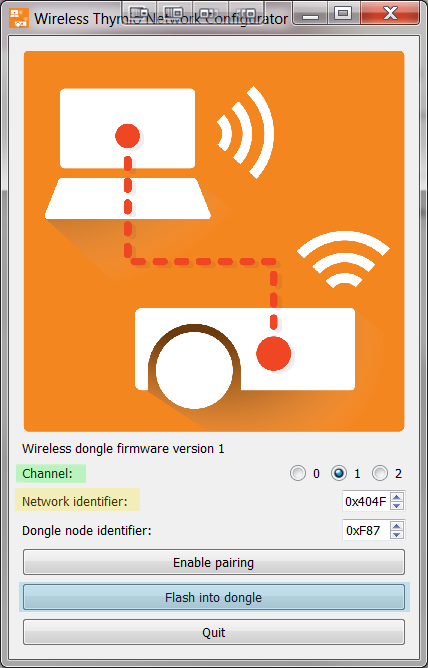 On the Wireless Thymio robot:

Back on the computer:

You can of course add as many Thymios as you want in a network, for example for performing collective tasks.

If you have lots of robots and they have their own network, it is better to distribute the networks on the 3 available radio channels.

On recent versions of Mac OS X, you have to unplug and re-plug your dongle if you want to start this program again. This is due to a bug in the OS X serial driver.